A fun game between the parts, where modern and cosmopolitan man, loves todraw from the universe and the female wardrobe, offering a style so unpredictable in its new trends. And this is the cornerstone of “Girls Speak”, the new collection signed by Clizia Incorvaia  and Lola Ponce presented last night in Agrigento, in the Hotel Villa Athena. The T-shirt designed by the model of Agrigento and the singer and actress Argentina are a hymn to freedom of expression and the desire to impress and offer three different versions of the man who dares in life and love. The event “Girls Speak”, has recreated the atmosphere Gypsy traditional Andalusian flamenco with the acting of Argentine guitarist MiguelFernandez, host of “2011 Soul’s Food Nights” prestigious international music festival within the terraces five-star Villa Athena . The evening began with a talk on the subject of fashion and the emancipation of women today, attended by the twodesigners, actors, artists, journalists and the two testimonial of the “Girls Speak”, Marco Castelli face of advertising, and Joseph Giarratana shown on the shirts.

Later everything was flooded with hundreds of pink balloons, to enjoy a drink pink in the pool accompanied by the music of Miguel Fernandez, one of the greatest guitarists of flamenco and music from South America to the event “Soul’s Food Nights. “(agrigento.agrigentonotizie.it)

2011 edition of the popular festival in Sicily “Blues and Wine Soul Festival”.Concerts are held on the “Terrace of the Gods” Villa Athena, Agrigento, where theTemple of Concord and Juno offer you all the fascination with this place that the soul can provide.
Miguel Fernandez will host this important exhibition of international artists, opening the gala as a soloist with the “Miguel Fernandez Group,” August 7, 2011. 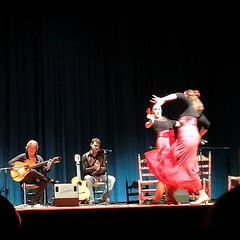